In late June 2009, as part of the Global Initiative for Wound and Lymphedema Care, Dr. David Keast, Dr Anna Towers and Mrs Patricia Coutts, a nurse with expertise in wound care, conducted a site visit to Uganda. The purpose was to evaluate the state of wound and lymphedema care to determine the possibility of developing education programs under the direction of Health Volunteers Overseas.  The visit was sponsored by the Association for the Advancement of Wound Care Global Alliance.  The team visited the Mulago Hospital Complex in Kampala which is associated with Makerere University and the Mbarara University Hospital in Mabarara in western Uganda. At each site the team met with doctors, nurses and allied health personnel and did observation ward rounds with the Uganda teams.  Sixteen key informant interviews were conducted. The team provided education to the Department of Surgery in Mabarara and had an opportunity to meet with the Deputy Commissioner of Health Services for Mulago Hospital, the Principal of the Mulago School of Nursing and Midwifery and the Director for Clinical and Health Services in the Ministry of Health.  The team also was able to visit a Level 4 Health Centre. 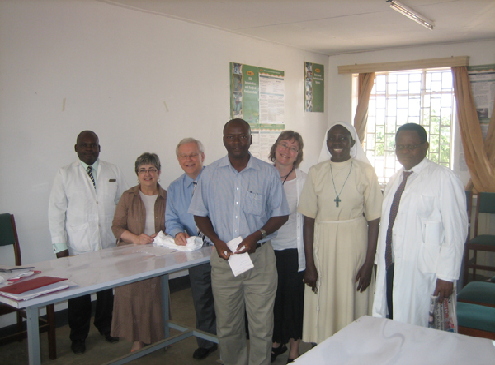 Demographic data demonstrate the sharp contrast between Uganda and more developed countries. In Uganda 45 per cent of the population is under the age of  15 years, there is an average of seven children per female and 80 per cent of the population lives in rural areas. The average life expectancy at birth is 50 years for both sexes. (WHO 2006 data accessed August 2009 at http://www.who.int/whosis/en/index.html )

Public health care is delivered through a system of Health Centres with increasing capabilities from Level 1 to Level 4.  Only Level 4 Health Centres are staffed by a physician.  The majority of the care is provided by nurses, nurses’ aides or clinical officers.  There are a series of District Hospitals serving small areas and approximately 100 health regions some of which some have a Regional Hospital.  There is only one tertiary care national referral hospital for medical conditions, the Mulago Hospital Complex.  Mulago Hospital officially has 1500 beds but the actual occupancy is estimated to be 4500 patients. There are also a number of private hospitals and faith based hospitals in Uganda which the team was unable to visit. Few trained pharmacists are available to dispense medications. At the level of the regional hospital and higher, allied health-care professionals such as physiotherapists are available, but their numbers are small.

Given the relatively short life expectancy of Ugandans compared with that of people who live in developed nations, the major health problems in the country are those which affect younger people. The burden of chronic diseases as seen in older, more developed populations (such as heart disease, chronic obstructive lung disease, cancer and diabetes) is relatively low. Most wounds seen by the team related to the following:

At the two centres visited, lymphedema is not recognized as a common problem, and filariasis-related lymphedema is seen as a problem affecting only the northern part of the country. The prevailing opinion is that, because lymphedema is not painful, it is under recognized. Patients do not present at primary care centres until the condition is already well advanced. At that point, the fatalistic view that nothing can be done is prevalent among health-care providers. The only dressings available are gauze based and use of advanced dressings common in the devolved world is unknown.  Compression therapy is rarely used and is seen as too expensive. Buruli ulcer while recognized as existing was not treated in either teaching centre visited.

There is a genuine need for education and training in wound and lymphedema care. There are both perceived and unperceived needs at the national level. At the two hospitals visited, there is a perceived need for improved care for burns, trauma and post-operative wounds. While there is recognition that other types of wounds (e.g., diabetic foot ulcers, venous leg ulcers, Buruli ulcers, skin breakdown due to leprosy) exist, these are not seen routinely at this level. However, the Commissioner of Clinical and Health Services in the Ministry of Health does recognize the need for wound and lymphedema care in regional areas.

After visiting a number of facilities and interviewing clinicians in Uganda, the Canadian team recommends the creation of a joint initiative coordinated by the World Alliance for Wound and Lymphedema Care to address the identified deficiencies. The initiative would be based around an interprofessional “train the trainer” approach, starting at the national level and working down through the structure of the health-care system to primary care delivery. To ensure its effectiveness and sustainability, the initiative needs to be seen as a partnership between both the Ministry of Education and Sport and the Ministry of Health, as both ministries have responsibilities in the training of clinicians. Both wound- and lymphedema-care education should occur together.